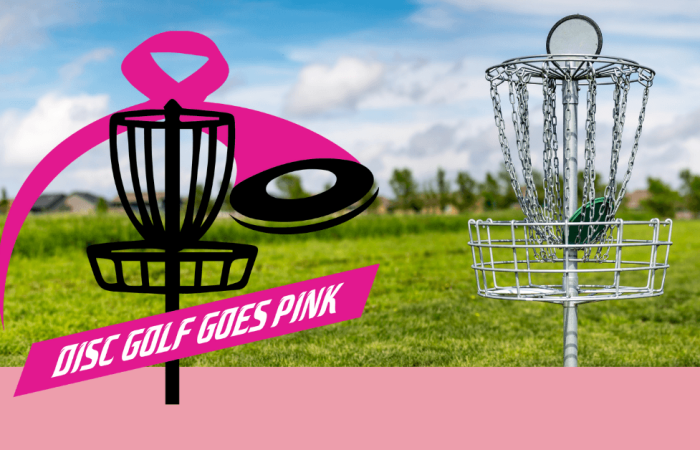 Disc golfers from across central Alabama and beyond are expected to attend Disc Golf Goes Pink on August 13 in Calera, Alabama. This second annual tournament raises critical funds for the Breast Cancer Research Foundation of Alabama.

Presented by Bham Now, the PDGA-sanctioned tournament invites disc golfers of all ages and skill levels to enjoy 36 holes across two courses—Oliver Park and the Double Creek course at George W. Roy Recreational Park—playing one round in the morning and one round in the afternoon. Awards will be given in every category that includes at least three players. Players will have the option to compete for an ace (“hole in one”) pot and closest to the pin.

“Disc Golf Goes Pink is a great, no pressure day out with friends and family,’ says Ed Hoffman, tournament organizer and Birmingham disc golfer. “It’s really laid back. We strive to make it as beginner-friendly as possible. There will be all skill levels, so it’s a great tournament for folks who have been tentative to play competitively—and it’s for a great cause, so it is a win-win.”

Hoffman noted thanks to Calera Parks & Rec, new tee pads (red level) will be unveiled at the Double Creek course for this tournament which will accommodate arms throwing at shorter distances.

“In the 12 years of Calera Goes Pink, the city has raised nearly $480,000 for local breast cancer research. The community should be extremely proud,” says Kate Kiefer, BCRFA board member and organizer of the campaign. “These funds fuel the Breast Cancer Research Foundation of Alabama’s mission to eradicate the disease by funding promising research across the state.”

Kiefer explained that more than 4,200 Alabama women will receive a breast cancer diagnosis this year alone, adding that “BCRFA funds meet a critical need by accelerating science towards a cure.”

BCRFA Gets Decked Out in Diamonds & Denim

GRAB YOUR HELMET AND GET READY TO RIDE! Birmingham, AL - The Dixie Divas Riding Club…