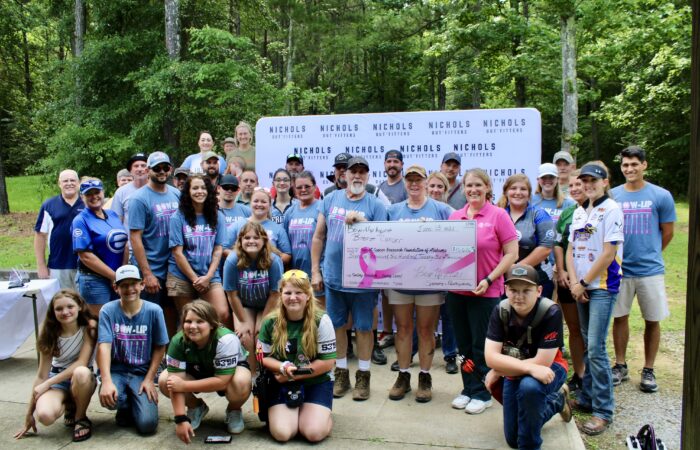 The Breast Cancer Research Foundation of Alabama (BCRFA), Heritage Archery Club and Nichols Outfitters today announced that $16,626 has been raised for breast cancer research after the close of the 10thannual “Bow-Up Against Breast Cancer” 3-D archery tournament.

The event, which was held at Cullman Archery Park on June 12-13, hosted 132 archers from across Alabama and bordering states competing in events such as fixed pins, open class, traditional, senior and youth (15 and under). Teams also competed for the top archer and team bow-up awards.

“On the 10th anniversary of this event, we couldn’t be prouder that our archers have continued to show up to support this important cause,” said Charmen McAlpine of Heritage Archery Club. “The competition we see each year is impressive, but it’s the funds raised that really drive us to continue this event.”

All proceeds from the event benefitted the Breast Cancer Research Foundation of Alabama, which funds Alabama-based breast cancer research at the O’Neal Comprehensive Cancer Center at UAB, as well as their collaborative partners.

“Over the last decade, Bow-Up archers put breast cancer in their sites and raised over $200,000. That is an incredible feat,” said Beth Bradner Davis, executive director of the Breast Cancer Research Foundation of Alabama. “It truly illustrates the power of collaborative, grassroots fundraising. This group is supporting life-saving research that affects thousands of patients and survivors in Alabama and beyond.”

In the last 10 years, the event has raised $213,666 for local breast cancer research. That total is a combination of corporate sponsorship, registration fees and individual giving. Nichols Outfitters, an outdoor apparel, hunting equipment, firearms and archery retailer, returned this year as presenting sponsor.

“It’s our pleasure to be a sponsor for Bow-Up Against Breast Cancer,” said Mick Springer, lead archery technician at Nichols Outfitters. “We’re thrilled each year to support this event and try to help find a cure for breast cancer.”

Over 100 disc golfers from across Alabama and beyond attended the 2nd annual Disc Golf Goes Pink tournament in Calera on Saturday, August 13.

Over 700 people spent the afternoon at Cahaba Brewing Company on Sunday, October 9, enjoying…