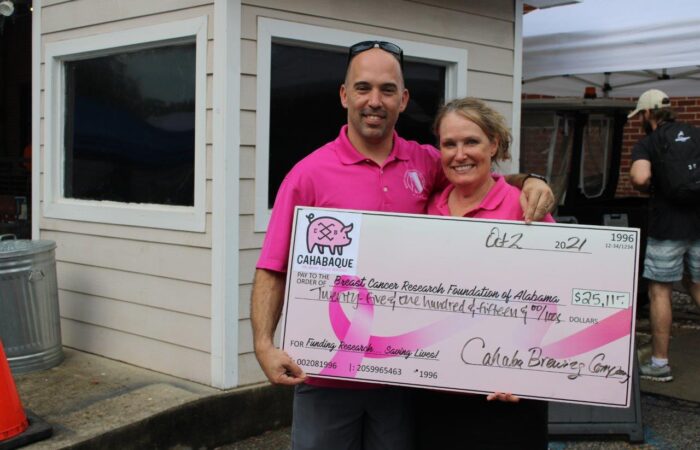 Eric Meyer, the co-founder of Cahaba Brewing Co. and Mountain Brook Fire Department firefighter, started the event in 2013 after a co-worker was diagnosed with breast cancer. “We reached out to the BCRFA because we wanted the funds raised to support our local community,” said Meyer.

“Our longtime partnership with Cahaba Brewing Company through CahabaQue has meant tremendous support for the cutting-edge breast cancer research happening right here in Alabama,” said Beth Bradner Davis, BCRFA Executive Director. “Thanks to this year’s sponsors, guests, cook teams, and volunteers, we are able to invest even more to help diagnose, treat, prevent, and eradicate the disease.”

All funds raised at CahabaQue stay in Alabama, but the impact is worldwide.

About the Breast Cancer Research Foundation of Alabama
Founded in 1996, the Breast Cancer Research Foundation of Alabama (BCRFA) is a nonprofit organization whose mission is to find a cure for breast cancer by funding promising breast cancer research in Alabama and raising community awareness and funding for that research. BCRFA funds promote a comprehensive approach to battling breast cancer by promoting collaborative and innovative research to help diagnose, treat, prevent, and eradicate the disease. With community support, BCRFA has invested over $11 million in life-saving breast cancer research. All funding stays in Alabama, but the impact is worldwide. Learn more about our mission and breakthroughs at www.bcrfa.org.

Bow-Up Against Breast Cancer archery tournament raises over $13,000 for research

BCRFA raises over $287,000 for lifesaving research at spring events

At BBQ cook-offs, archery tournaments, and beyond, Alabamians joined together to fund local research Whether…