Birmingham, AL (August 13, 2019)— As part of their ongoing support of breast cancer research, the Gardendale Youth Football Association raised over $6,800 on Saturday, August 10th at the 11th Annual Charity Bowl. The Gardendale Rockets, Fultondale Wildcats, and Hoover Buccaneers faced-off during four football games throughout the day while raising money towards life-saving research in Alabama.

“We look forward to Charity Bowl every year” Beth Bradner Davis, BCRFA Executive Director said. “The Breast Cancer Research Foundation of Alabama (BCRFA) was founded by a grassroot effort in 1996 and community events like Charity Bowl continue to support our mission. One in eight women and one in one thousand men will be diagnosed in their lifetime. Money raised will fund research, which will help find better ways to treat, and ultimately find a cure, for this disease. All of the money raised stays in Alabama to fund research and save lives.”

The Gardendale Youth Football field turned pink with decorations on the press box and throughout the field. Hundreds of youth athletes performed throughout the day, wearing pink in support of the cause. Bounce houses, snow cones, and funnel cakes helped round out the day of fun as people cheered on their favorite teams.

Gardendale Mayor Stan Hogeland kicked things off by welcoming and thanking everyone for attending and their support of Charity Bowl. During each game, a moment was taken to honor breast cancer survivors in attendance. Each survivor was given a special corsage to wear throughout the day, provided by The Secret Garden.

During half-time of the last game of the day Jon Robinson, the president of Gardendale Youth Football Association, presented a $6,800 pink check to Bruce Sokol, co-founder of the BCRFA, and Mrs. Davis.

Sponsors for this year’s Charity Bowl included: Supercuts, the City of Gardendale, Meredith Carpenter Law, Therapy South, and the Gardendale Athletics Club. To find out more about the BCRFA and how to support their efforts, visit BCRFA.org. 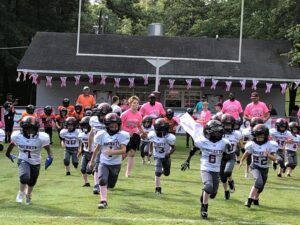 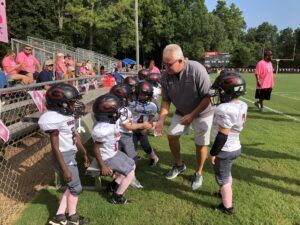 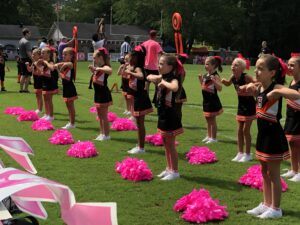