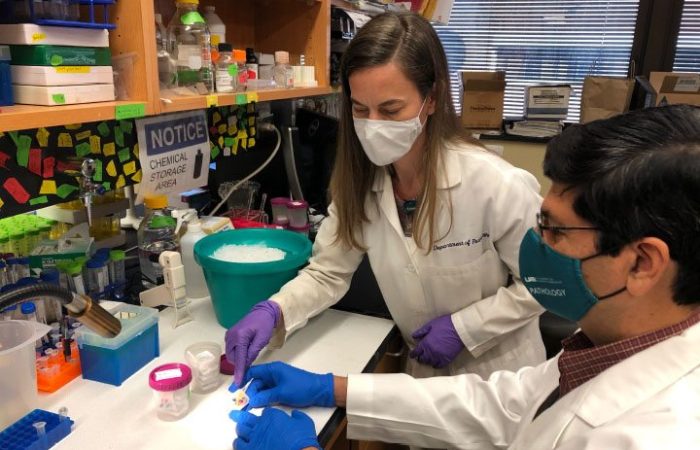 “I am certain that in under 30 years, most cancers will be fairly manageable. Metastasis and its challenges may be met, and a cure may happen in the next decade or two. That I see as a certainty.”

Dr. Lalita Shevde-Samant and Dr. Rajeev Samant have spent decades researching breast cancer and how to fight it. With funding from the Breast Cancer Research Foundation, they are making incredible discoveries and advancing treatments.

In a recent interview with the BCRFA, they discussed their current work at the O’Neal Comprehensive Cancer Center at the University of Alabama at Birmingham and why they believe funding from organizations like the Breast Cancer Research Foundation of Alabama is critical for future breakthroughs and the state at large.

Dr. Shevde-Samant’s BCRFA-funded work focuses on the immune system in breast cancer patients and how immune cells surrounding breast cancer might be manipulated.

Knowing this, her research asked a fairly simple question: “Can we convert those immune cells that have become tumor-promoting back to tumor-killing?”

She thought the answer was yes, and better yet, she believed it could be done using an already FDA-approved drug used in the treatment of other cancers.

Of course, the trick would be proving her hypothesis in the lab which requires funding. “This is where the BCRFA came in,” Shevde-Samant said. “Through the pilot funding that BCRFA gave me, I was able to undertake some very bold experiments. Take some chances, test the drug.”

Ultimately, her team was successful. “[We] demonstrated it is possible to change the portfolio of the immune cells that are surrounding breast cancer and convert them to be tumor killing with use of an FDA approved drug.”

Shevde-Samant continued, “The important thing is that FDA-approved drug is not yet used for breast cancer. It was used for [skin cancer] and leukemia. So, our work is showing that this drug could be efficacious in reprogramming the immune system of breast cancer.”

Dr. Samant’s work aims to better understand cell signaling—when cells assume different roles than they are intended to. He wants to understand how cancer cells fight cancer treatment and disable their fighting capacity.

“If we could do that, we could probably stop or cure metastasis,” explains Samant.

Metastasis means that cancer spreads to a different body part from where it started. When this happens, doctors say the cancer has “metastasized.” Some doctors may also call it “metastatic cancer,” “advanced cancer,” or “stage 4 cancer.”

Samant is currently testing his idea that stopping cancer cells from signaling could stop metastasis. “I’m not as close to an FDA-approved drug being tested in a Phase I trial like Lalita, but I am going to test it,” he said.

With funding from the BCRFA, his work in this area only started about two years ago, but he is already seeing positive results that have allowed him to receive more funding, including an O’Neal Invests grant award from the O’Neal Comprehensive Cancer Center at UAB, to take his tests further.

The importance of seed funding

While they have both made great strides in their studies, both Dr. Shevde-Samant and Dr. Samant agree that they wouldn’t have gotten very far without the initial funding from the BCRFA.

Samant explained that researchers find themselves in a catch-22 when seeking major funding from government-backed organizations like the National Institute of Health or the National Cancer Institute.

“The U.S. government funds research with a lot of attention to accountability and stewardship of taxpayer dollars, which means in order to receive their funding, you essentially have to show that your project has feasibility and looks promising.”

With regards to his metastasis research, Samant shared that while much progress has been made, death rates aren’t coming down as fast as he would like them to.  “The metastasis challenge is still there. Once in a while you need an out of the box approach. I always like to take an out of the box approach. But then the government is not going to fund you. For me, the BCRFA offered a very good opportunity.”

BCRFA funding also propelled Shevde-Samant’s work to the next level.

“What our initial funding [from the BCRFA] allowed us to do was apply for funding from the U.S. Department of Defense and I actually got several grants from them that really built upon the evidence I had gathered from the BCRFA-funded work,” she said. “It was really the seed of funding that allowed me to continue. I am extremely grateful for that.”

Seed funding from organizations like the BCRFA clearly advances the science itself, but Samant also sees an impact in the community.

“If we have local funding to be the first to take on the challenges, we can attract the federal attention to the state,” he says. “This allows us to bring on more graduate students and pass down knowledge to the next generations.

Samant believes that when Alabama institutions like UAB are seen as elite, more people want to live in the state, and the local economy benefits. “It’s not just about the cure. It’s about UAB being the best place to work, best place for cancer treatment, in the nation. The BCRFA is contributing to that in a great way. When people see such support, the premium scientists say, ‘I want to work at UAB because they will have this support.’”

A BCRFA-funded research project led by Rajeev Samant, Ph.D., professor of pathology at the University of Alabama at…